We would like to ask that if you are reading information on Facebook, Reddit or other online sources, please remember not to post anyone’s photo with accusations regarding this case.  Everyone should have the presumption of innocence.  Again, if you have someone you think may be worth a look, send in a tip to the contact numbers below.  You can do this anonymously.  Although you may think your tip will not matter, recall that many killers were brought to law enforcements attention from that one phone call, i.e, Ted Bundy being the most notorious. 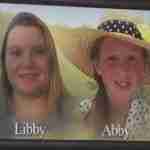 Abby & Libby were best friends.  They both attended the same school and hung out together whenever possible, like most best friends.  On February 13, 2017, they were home on a school administrative day.  It was one of those unplanned days off from school, an extra left over from snow days not taken.  This would have been a day that most companies and businesses were open.  It was a general work day in other words.  It was a day that not everyone had on their calendar; only those in the local area who may have the need to know the school year calendar, for example. On this day, it was unseasonably nice out for this time of year.  Because of this, the girls asked to go hiking at a popular hiking trail that afternoon.  They would only be gone for maybe 2 hours, with family dropping them off and family picking them up.   It was a spur of the moment trip to a place they both loved.  It was a place populated by others, including kids their age and known to be safe.

They were dropped off just before 2 pm that day.  However, when 3:15 came around, they were unable to be located when family began calling and texting and came for pickup.  After realizing that the girls were not answering calls, family members walked the trails.  Other family members were notified and the police were called.  The response was fast and immediate.  By 4:15, many family members were already arriving and searching the entire area.  They searched until after dark.  They began searching again at daylight the next morning.  There were hundreds of searchers.  Less than 24 hours after they went for a fun day out hiking, both girls were found murdered near the trail a few hundred yards from the large bridge on the trails.  .

The police immediately called on the public’s help to solve this murder.  Why? As it turns out, the girls took a photo/video of a man walking on the bridge which was later recovered from one of their Snapchat accounts.  This video provided law enforcement with the best lead yet: a photo and voice recording of the suspect.  Taken without the killer’s knowledge, the girl’s captured a video of the man walking and some audio of his voice as he directed them “down the hill”. Video Clip Here   Police have indicated that there may be more video or audio that they cannot release at this point.

Two years into the investigation,  the police abruptly changed course and released a new sketch of a much younger man, with this new audio from a man saying “Guys, down the hill”.  They asked the public to disregard the original sketch and focus on the new, younger man depicted in the new sketch as well as his voice in the audio clip. This man is often referred to as “BG” or the bridge guy.  Officers asked viewers to focus on the way the main walked in the video and the way he spoke and to call in any tips.  In a very emotionally charged announcement, the police spokesperson stated that they believed the suspect may actually be in the room and that the task force was closing in.  However, no arrest has been made.

Updates to the Case

The public has remained very active in this case.  They have held fundraisers, concerts, and events.  Family members have been on Dr. Phil, Dr. Oz and the Today Show – all in an attempt to keep the story alive and get the sketch out in front of the eyes of the public, hoping that someone would recognize the face and call in a tip.  The police have received nearly 50,000 tips and they believe they are just one piece of information away from closing this case and finding Abby & Libby’s killer. Police stated that although this case is now on its 3rd year mark, it is far from a cold case.  They vow to work it until it is solved.

There continues to be much interest in finding Abby and Libby’s killer.  However, there are many unfounded theories, speculation and accusations in the online community.  Both the FBI and Indiana State Police have tip lines set up for people who do not wish to communicate within the Delphi community.  You can find the FBI links here:

If you believe you can be of assistance to the police in this investigation, please share this information.  You can call the tipline at: 844.459.5786